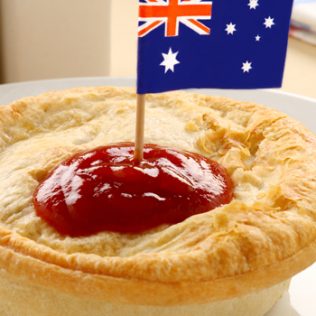 9 Famous Australian foods and where to find them

Australia as a gourmet food destination? You bet. Australia has given the world some magnificent dishes – from the meat pie to the lamington and many taste sensations in between. We have combined 9 iconic Aussie foods with that other great Australian innovation, the true blue road trip. The result? A tour for the taste buds. Read on …

1. Meat Pie: The current recipient of the Best Meat Pie in Australia Award is Rolling Pin Pies & Cakes, in Geelong, not far from Melbourne. Hospitality Magazine awarded the bakery with 2013 Best-in-Show for its chunky beef pie. Don’t forget to top yours with a dash of tomato sauce.

2. Lamingtons: If you’re a traditionalist, then you’ll probably want to head to Queensland for a lamington, because it was in Queensland in 1901 that the humble lamington was created. That fact aside, Kytons Bakery in South Australia has a reputation far and wide for amazing lamingtons and boasts a few awards for them too. Remember, lamingtons are best eaten with a hot cuppa (tea, that is).

3. Fish & Chips: Last year the National Seafood Industry gave its top honours to Sweet Lips, a franchise with three locations in Western Australia: Leederville, Freemantle and Scarborough. Aside from traditional fish and chips, you can select oysters, mussels, prawns, crab cakes, squid … the list goes on. Sweet Lips is also quite famous for its fried fetta cheese, (bet you didn’t see that coming) which means you can happily dine with a vegetarian.

4. Vegemite: Vegemite has been around for more than 90 years. What’s more, despite its manufacturer now being owned by an American parent company, Vegemite is still made in Australia. You can get some straight off the Kraft production line at the factory in Todd Road, Port Melbourne.

5. Macadamia Nuts: Versatile and delicious, you can have macadamia nuts in lots of ways: sweet or savoury, in hot dishes or cold, cereal or ice cream … they are all wonderfully delicious, but the best way to eat them is straight from the tree. The place to do that is the Big Macadamia Plantation in Nambour, Queensland. There’s even a Macadamia Nut Mobile to take you on a tour. It’s more than a gastronomic experience; it’s a whacky day out. Bonus, it’s one of Australia’s BIG THINGS, but that’s a blog for another time.

6. Tim Tams: About 30 million packets of Tim Tams are sold each year, which attests to the sheer more-ish-ness of these chocolate biscuits, which were named, believe it or not, after a racehorse that ran in the Kentucky Derby. And while you can get Tim Tams just about anywhere in the world these days, in Australia eating them is a highly popular past-time – in fact, it’s considered downright patriotic. As a result you can buy Tim Tams anywhere. Every single supermarket or corner store stocks them. Some people like to eat them as they’re melting, others dunk them in tea or coffee and some prefer them refrigerated.

7. Barramundi: The Barramundi is a big fish found in waters along the north coast of Australia – from South-East Queensland right over the top end to Shark Bay in Western Australia. Australia’s Indigenous people, the Aborigines, have several dreamtime legends about the Barramundi, and it is such a beautiful fish for eating that it is often on the menu in restaurants. The best way to experience Barramundi is to catch your own and have it cooked fresh. You can take fishing trips from Darwin, in the Northern Territory.

8. Kangaroo: The Australian Hotel in The Rocks is the oldest continuously licensed pub in Sydney. Originally, the pub was closer to the Quay, but when the plague hit Sydney in 1900, the Australian Hotel was one of many buildings torn down to prevent further outbreak. That said, the existing building, which was constructed in 1913 is well preserved and not only offers a glimpse of historical Australia, but a great ‘Coat of Arms’ pizza which is a combination of Kangaroo and Emu. Crocodile is on the menu too. All best served with a nice cold beer.

9. Snags: Gourmet Traveller published a list of the country’s top ten sausages, or as us Aussies call them, ‘snags’. On that list is Griffith Butchery, in Canberra, and there’s probably no more fitting place to fire up a barbecue full of tasty snags than on the shores of Lake Burley Griffin in the nation’s capital. The lush, grassy parklands around the lake (which are not far from the Butchery) are an ideal spot to picnic too, with BBQ facilities and views of some of Australia’s most important buildings including the National Museum, National Gallery, National Library, Parliament House and the High Court.

And here ends our ‘gourmet guide’ to tracking down Australia’s best known foods. There’s definitely something to suit all taste buds!