Notice to all customers:

From the 29th of August 2016, our branches will be re-branded from Redspot to our franchise brand Enterprise Rent a Car. When collecting you vehicle be sure to walk up to the Enterprise Rent a Car desk and our team will give you the same great service you would expect when booking with Redspot.

As the largest city in Australia and with so much to see and do, getting around Sydney is easier with Redspot Car Rentals from Sydney Airport. Redspot Car Rentals has a variety of vehicle types to suit all business and tourist travellers from compact hatchbacks to sedans, SUV’s & mini buses.

Sydney can be a confusing place! Although much of it is centred in the CBD, there are many hidden treasures scattered around. If driving a hire car in Sydney is new to you, ensure you include a portable GPS in your car hire reservation to make your visit even easier. With GPS and car rental available at Sydney Airport, it is easy to enjoy the wonderful city of Sydney with Redspot Car Rentals.

All of Redspot Car Rentals vehicles are an average age of 6 months and are well maintained and serviced regularly. However, if the worst were to happen and you experienced a mechanical fault to your hire car, all of our Redspot Car Rental vehicles are covered by 24 hour roadside assistance. If the vehicle fault was not caused by the hirer (e.g. locked keys in car) there will be no cost incurred. Redspot Car Rentals also offers a small daily fee for a premium roadside assistance package that covers all those times where you accidentally leave the lights on or lock the keys in the car. For more information click here.

To collect your rental vehicle, first complete the neccessary rental paperwork at one of our car rental counters on the ground floor of T2 or T3. Once completed proceed outside to the car rental car park, where you will find our Redspot designated car park bays located on the ramp between ground level and level 2.

To return your rental car, take the CAR RENTAL ENTRY #2 and proceed to an available Redspot designated bay on the ramp between the ground level and level 2 of the car rental car park. 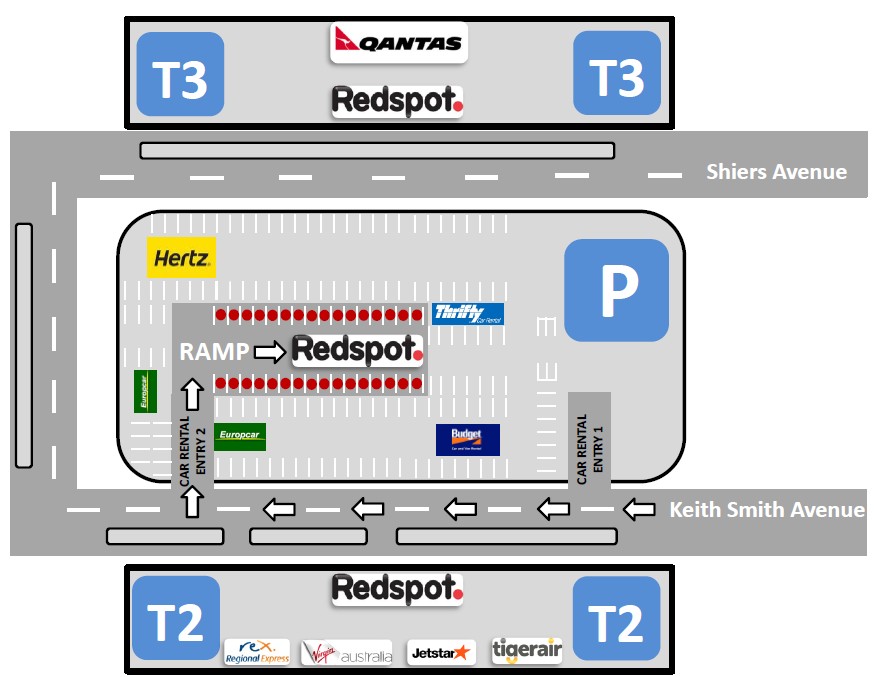 To collect your rental vehicle, once out of customs/immigration proceed to the Redspot designated counter located in the arrivals hall of the international airport terminal. Here our friendly staff will complete your rental paperwork and give you instructions on where to collect your vehicle.

Drop box available at all Redspot Car Rental counters in all terminals.

Toll roads can be found all around Australia and Sydney is no exception. There are various toll roads throughout Sydney and its surrounding areas. When you arrive at the counter for collection, you’ll be asked if you would like to pre-purchase a toll pass waiver for a small daily fee. This way, Redspot Car Rentals pay for all your toll charges during your hire period. For more information please visit our toll road page.

There are so many festivals and iconic destinations throughout Sydney. Some of these include its famous New Year’s Eve Party, Fashion Week, the world renowned Sydney Harbour Bridge and Opera House, Mardi Gras, The Rocks and Kings Cross. You could also visit the golden shores of Bondi Beach, spend a day at Luna Park, head to Royal Randwick, China Town or Darling Harbour, see the animals at Taronga Park Zoo or visit the illustrious Sydney Tower.

Sydney (Kingsford Smith) Airport (also known as Kingsford-Smith Airport and Sydney Airport) is located in the suburb of Mascot in Sydney, Australia. It is the only major airport serving Sydney, and is a primary hub for Qantas, as well as a secondary hub for Virgin Australia and Jetstar Airways. Situated next to Botany Bay, the airport has three runways, colloquially known as the “east–west”, “north–south” and “third” runways. Sydney Airport is one of the oldest continually operated airports in the world and the busiest airport in Australia, handling 36 million passengers in 2010 and 289,741 aircraft movements in 2009. It was rated the 27th busiest airport in the world in 2010. Flights from Sydney link with all states and territories of Australia. Currently, 47 domestic destinations are served to Sydney direct. For more information about Redspot Car Rentals Sydney Airport, contact us via one of the options on the at the top of the page. Alternatively, you can call our national reservation centre on 1300 668 810.

What our Customers are Saying About Redspot Sydney: