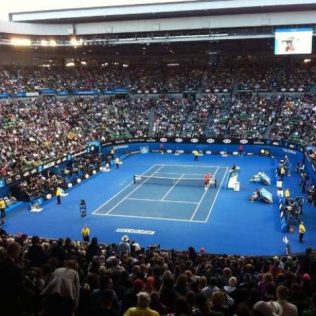 Melbourne in January – Tennis Anyone?

Summer in Melbourne is tennis. Beautiful summer evenings, the best tennis players on the planet, fanatical fans, plenty to see and do and have I mentioned the tennis? For two weeks in January, Melbourne has it all.

Come and be a part of this sporting festival as the household names of tennis battle it out on court. It doesn’t matter whether you cheer for Rafa, Federer, Serena or Lleyton they are all global superstars, all striving to claim the first Grand Slam title of the tennis season. Melbourne in January keeps getting bigger and better with this event as it’s main draw-card.

After a day at the Open , pop on down to the banks of the Yarra River which are alive with activities and live entertainment day and night. Open daily from 18 to 31 January, get a taste of Melbourne’s famous world-class dining and food vendors, as the pathway to the Australian Open serves up not only Grand Slam action, but incredible food and wine – right in the heart of Melbourne.

Whether you’re young or young-at-heart get out and about in Melbourne this January. There is nothing that beats the buzz and vibe of this city when the tennis rolls into town.