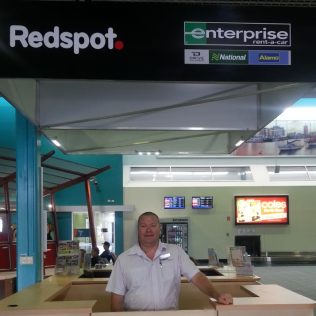 The Redspot counter will be opened for business from Sunday 1 November, 2015.

Dan Mekler, Managing Director of Redspot Car Rentals is thrilled about the opening of its latest Queensland operation.

“We’re very excited about bringing our services to Townsville Airport. North Queensland is a growing and dynamic market and the terminal at Townsville Airport now includes Redspot Car Rentals which will provide improved facilities to domestic and international travellers”, said Dan Mekler.

Our Townsville Airport opening coincides with the Australian launch of our new franchise with Enterprise Holdings, owner of the highly successful Enterprise, National and Alamo car rental brands.

Redspot Car Rental Townsville is the sixteenth airport site to be opened in Australia and builds on the company’s North Queensland servicing.

Established in 1989 with just a car and a ute, Redspot Car Rentals is a home grown Australian owned company that has expanded across the continent to become a national operator and Australia’s largest locally owned car rental brand.

“Redspot will become the sixth car rental group at the airport, providing much needed services to visitors traveling to Townsville and the greater North Queensland region.”

“With Townsville Airport recently commencing direct international services to Bali (Denpasar), increased services to Cairns and more recently, direct to the Gold Coast via Rockhampton, now is the ideal time for Redspot to come on board. As the airport continues to grow and develop it is important we are able to meet the demands of increased passenger numbers,” said Mr Gill.